One psychologist greets another on the street: “You’re fine, how am I?”

Socrates came upon an acquaintance that ran up to him excitedly and said, “Do you know what I just heard about one of your students?” “Just a minute,” Socrates replied. “Before you tell me I’d like you to pass a little test. It’s called the Test of Three. “The first test is Truth. Are you sure that what you will say is true? “Oh no,” the man said, “Actually I just heard about it.” “So you don’t really know if it’s true, Socrates said. Now let’s try the second test, the test of Goodness. Is what you are about to tell me about my student something good?” “No, on the contrary..” “So,” Socrates interrupted, “you want to tell me something bad about him even though you’re not certain it’s true?” The man shrugged, rather embarrassed. Socrates continued. “You may still pass though, because there is a third test, the filter of Usefulness. Is what you want to tell me about my student going to be useful to me at all?” “Well it ..no, not really..” “Well, concluded Socates, “If what you want to tell me is neither True nor good nor ever Useful, why tell it to me at all?” The man was defeated and ashamed. This is the reason Socrates was held in such high esteem. It also explains why he never found out what Plato was up to.

Lifelong football fan Danny Webber had one last wish – to meet QB Andrew Luck and the Indianapolis Colts. With help from the Colts organization and wonderful workers at the Heritage House, his wish was granted. Watch as Inside the NFL cameras were there to capture this truly heart-warming story.
http://www.youtube.com/watch?v=uU1sK9HLpFo&feature=youtu.be

Volcano Safety
This podcast is based on the Question of the Month from the Scope on Safety section of the October, 2012 issue of Science Scope, a magazine for middle school science teachers, published by the National Science Teachers Association.  The question of the month is written by Ken Roy, director of environmental health and safety for Glastonbury Public Schools in Glastonbury, Connecticut.

The question of the month deals with the use of ammonium dichromate in the classroom.

We won’t blow our tops on this one.

“The following Online Interactive Thinking Strategies and Tools are designed to provide a scaffold which enables students to think with more depth and structure. When using them, ask students to continually reflect on and justify which Habits of Mind best suit how they are thinking.”

There are some terrific organizers here that would be easy to replicate.
http://learningcurveplanner.com.au/thinking-tools.html

This website introduces primary pupils to historical sources. It helps children to think and work like historians by using objects, images and documents from the collections of the V&A and The National Archives to learn about the Victorian period. Begin with this tutorial to get the best out of the six themed units that follow.
This short starter activity introduces the learning model that guides and supports pupils’ work throughout the resource.
The approach for dealing with sources has been broken down into four steps. A simple mnemonic, L-A-C-E, helps pupils to remember them.
Two online presenters guide pupils through each unit. They introduce a range of different historical sources and ask various prompt questions at each step of the LACE process. There is some variation between these questions, to accommodate the different types of sources used in this resource, but they retain the same focus throughout:
LOOK: Describe what you can see.
ASK: What questions do you need to ask, and answer, to make sense of what you have seen?
CONCLUDE: What have you learned about the issue that you are investigating from this source?
EXPAND: What more would you like to know about? How can you find out?
The steps in the LACE process are not always mutually exclusive. In fact, evaluating evidence is often an iterative process. Pupils may sometimes engage with the different steps in a non-linear way. When this happens it is not a problem. The main purpose of this approach is to encourage pupils to develop different types of questions to progress their understanding of the evidence.

A visual A-Z of the hidden treasures of language.

As a lover of language and words, especially obscure and endangered words, I was instantly besotted with Project Twins’ visual interpretations of unusual words, originally exhibited at the MadArt Gallery Dublin during DesignWeek 2011.
http://www.brainpickings.org/index.php/2012/07/02/project-twins-unusual-words/

We are the best site for downloading FREE public domain Golden Age Comics. All files here have been researched by our staff and users to make sure they are copyright free and in the public domain. To start downloading just register an account and enjoy these great comic books. We do not charge per download and the goal of the project is to archive these comic books online and make them widely available.
http://digitalcomicmuseum.com/

Can Your Kid Read Graphs and Charts?

As these visual displays become more and more ubiquitous, it is all the more important that students know how to read, interpret, and summarize the information presented. It’s become an essential element of overall literacy.
As students get older, it’s important for them to learn not only how to be intelligent viewers of graphic representations, but wary and cautious viewers. While charts and graphs obviously are a boon to our ability to communicate information about large numbers or complicated relationships, there are also hidden pitfalls.
http://www.theatlantic.com/national/archive/2012/10/can-your-kid-read-graphs-and-charts/263689/ 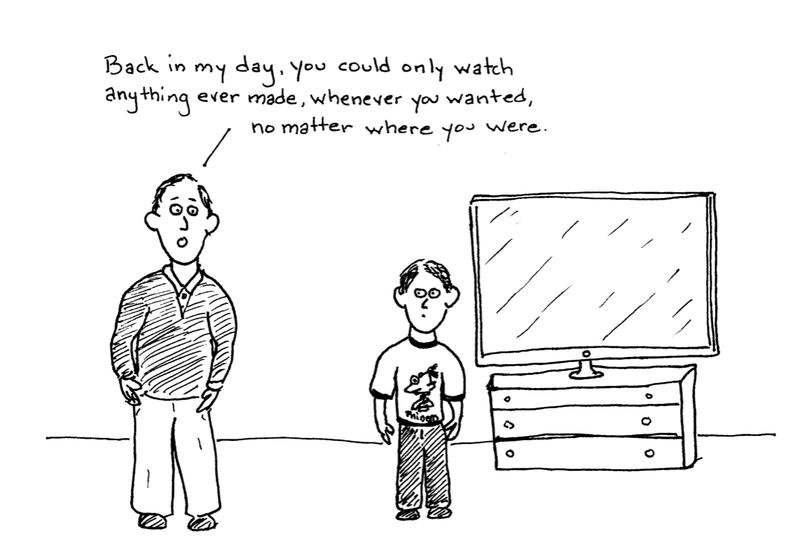 “We left the boxes in the village. Closed. Taped shut. No instruction, no human being. I thought, the kids will play with the boxes! Within four minutes, one kid not only opened the box, but found the on/off switch. He’d never seen an on/off switch. He powered it up. Within five days, they were using 47 apps per child per day. Within two weeks, they were singing ABC songs [in English] in the village. And within five months, they had hacked Android. Some idiot in our organization or in the Media Lab had disabled the camera! And they figured out it had a camera, and they hacked Android.”