Before going to Europe on business, a man drives his Rolls-Royce to a downtown New York City bank and asks for an immediate loan of $5,000. The loan officer, taken aback, requests collateral. “Well then, here are the keys to my Rolls-Royce,” the man says. The loan officer promptly has the car driven into the bank’s underground parking for safe keeping and gives the man the $5,000. Two weeks later, the man walks through the bank’s doors and asks to settle up his loan and get his car back. “That will be $5,000 in principal, and $15.40 in interest,” the loan officer says. The man writes out a check and starts to walk away. “Wait, sir,” the loan officer says. “You are a millionaire. Why in the world would you need to borrow $5,000?” The man smiles, “Where else could I find a safer place to park my Rolls-Royce in Manhattan for two weeks and pay only $15.40?”

A man goes on a 2-month business trip to Europe and leaves his cat with his brother. Three days before his return he calls his brother.

Brother 1: So how is my cat doing?

Brother 1: Alright, alright, forget about it. Anyway, how is Mom doing?

Brother 2: She’s up on the roof and we’re having trouble getting her down.

A Spanish teacher was explaining to her class that in Spanish, unlike English, nouns are designated as either masculine or feminine.

“Pencil,” however, is masculine: “el lapiz.”

A student asked, “What gender is ‘computer’?”

Instead of giving the answer, the teacher split the class into two groups, male and female, and asked them to decide for themselves whether “computer” should be a masculine or a feminine noun.

Each group was asked to give four reasons for its recommendation.

The men’s group decided that “computer” should definitely be of the feminine gender (“la computadora”) because:

1. No one but their creator understands their internal logic.

2. The native language they use to communicate with other computers is incomprehensible to everyone else.

3. Even the smallest mistakes are stored in long term memory for possible later retrieval; and

4. As soon as you make a commitment to one, you find yourself spending half your paycheck on accessories for it.

The women’s group, however, concluded that computers should be masculine (“el computador”) because:

1. In order to do anything with them, you have to turn them on.

2. They have a lot of data but still can’t think for themselves.

3. They are supposed to help you solve problems, but half the time, they ARE the problem; and

4. As soon as you commit to one, you realize that if you had waited a little longer, you could have gotten a better model.

A man was walking along a California beach and stumbled across an old lamp. He picked it up and rubbed it and out popped a genie. The genie said, “OK. You released me from the lamp, blah blah blah. This is the fourth time this month and I’m getting a little sick of these wishes so you can forget about three. You only get one wish!” The man sat and thought about it for a while and said, “I’ve always wanted to go to Hawaii but I’m scared to fly and I get very seasick. Could you build me a bridge to Hawaii so I can drive over there to visit?” The genie laughed and said, “That’s impossible. Think of the logistics of that! How would the supports ever reach the bottom of the Pacific? Think of how much concrete…how much steel!! No, think of another wish.” The man said OK and tried to think of a really good wish. Finally, he said, “I’ve been married and divorced four times. My wives always said that I don’t care and that I’m insensitive. So, I wish that I could understand women….know how they feel inside and what they’re thinking when they give me the silent treatment….know why they’re crying, know what they really want when they say ‘nothing’….know how to make them truly happy….”

The genie asked, “Do you want that bridge two lanes or four?”

The Train that never stops

I was recently reading the November, 2013 issue of Science Scope, a magazine written for Middle School Science Teachers, published by the National Science Teachers Association.  In this issue, I came upon an article entitled, “Classroom Zoo: Practicing Ethical Research on Animals,” written by June Poling from Portland, OR.

She developed a classroom invertebrate zoo project where students take on the role of zookeepers.

Is your staff drowning under the waves of change? Steps to save them: http://www.ascd.org/publications/educational-leadership/oct11/vol69/num02/Not-Waving,-But-Drowning.aspx … #MichED

Finally, an Alternative to the Much-Hated QR Code http://mashable.com/2014/01/09/qr-code-clickable-paper/#lead-image:eyJzIjoidCIsImkiOiJfODcxdHhrcjB2NTlpenp1eDJveHp0MHZlaXBfIn0 … via @mashable

Redesign of school discipline practices long overdue. Too many schools resort too quickly to exclusionary disciplinehttp://go.usa.gov/ZdxC

Strategy 5: Dare to Be Unconventional

What Happens on the Internet in a Minute? 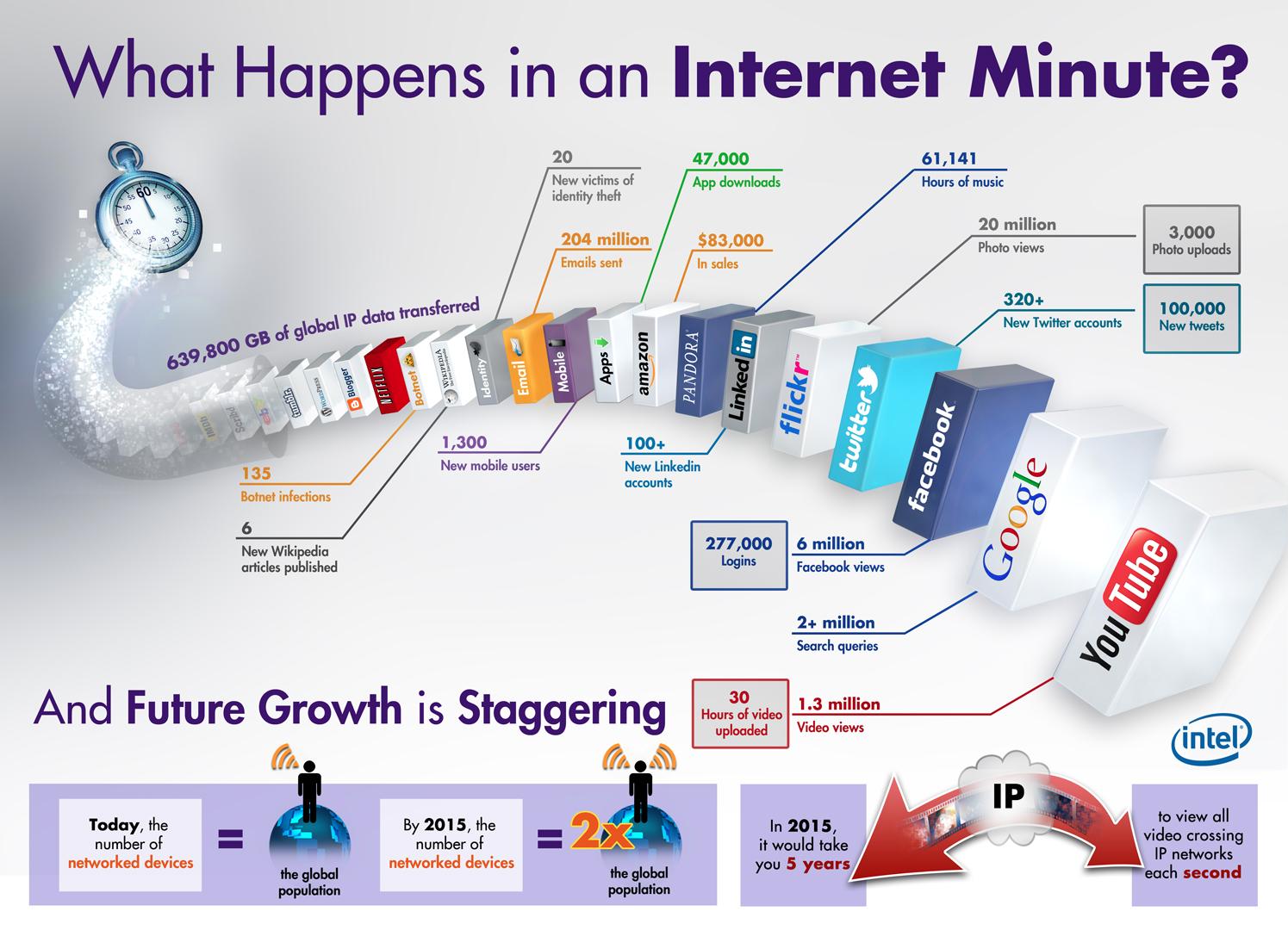 The Principal: The Most Misunderstood Person in All of Education

A few years ago when I walked the hallways of a high school with my five-year-old niece Evie, she remarked, without prompting: “There’s the principal’s office: you only go there if you are in trouble.”

Most remarkably, those very people who did not understand what a principal did were often the first to argue for the abolition of the role.

In American public schools, the principal is the most complex and contradictory figure in the pantheon of educational leadership.

The history of the principal offers even more contradictions. Contemporary principals work in the midst of unique modern challenges of ever-changing fiscal supports, school law and policy, community values, and youth culture.

The complex role of the principal is not an accidental by-product of history; rather, the principal’s position at the nexus of educational policy and practice was an intentional component of the role when it was originally conceived.

Like other middle managers, the principal had a “dual personality,” standing “on the middle ground between management and employee,” as both a loyal sergeant to a distant supervisor and a local administrator who had to negotiate with workers in order to get the job done properly.

Through the mid-20th century, the principalship was an inconsistently defined position, as often a teacher with administrative responsibilities as an administrator who supervised teachers.

As the principalship evolved away from the classroom to the administrative office, the principal became less connected with student learning, and yet more responsible for it.

Modern principals came to have less to do with student learning and more to do with upholding administrative structures and responding to public pressures.

For all those efforts, however, the history of the principalship is marked by an increasing discrepancy between the popular image and the actual work of the position. Ironic too, is the dominant image of the principalship with an office, given the great variety, mobility, human interactions, and community relations of principals’ work.

Common Core and the Food Pyramid

Unlike a lot of folks, it’s because I thought (and continue to think) that the Common Core itself just doesn’t matter that much.

Standards are just a bunch of words on paper.

I always think of the food pyramid (the one that the feds unveiled decades ago, only to decide that it was offering families bad advice and needed to be revised and replaced by “food plate” that Michelle Obama has championed. Whoops.).  When the pyramid was unveiled, I’m sure some amped-up nutritionists excitedly thought it would make a huge difference when it came to health and obesity.  Turned out: not so much. Most people have never paid a whole lot of attention; after all, it’s just a bunch of suggestions assembled through a bureaucratic process. (And did I mention it was questionable advice?)

In truth, the idea that the Common Core might be a “game-changer” has little to do with the Common Core standards themselves, and everything to do with stuff attached to them, especially the adoption of common tests that make it possible to readily compare schools, programs, districts, and states (of course, the announcement that one state after another is opting out of the two testing consortia is hollowing out this promise).

But the Common Core will only make a dramatic difference if those test results are used to evaluate schools or hire, pay, or fire teachers; or if the effort serves to alter teacher preparation, revamp instructional materials, or compel teachers to change what students read and do.  And, of course, advocates have made clear that this is exactly what they have in mind.

Common Core boosters seem to suggest they’re just proposing a food pyramid. This, of course, infuriates the critics, who think (fairly enough) that what the Common Core’ites are really after is to reorder schooling, soup to nuts.

Fighting in Teenagers Lowers Their IQ

Florida State University’s College of Criminology and Criminal Justice found that injuries sustained in fighting as a teenager lead to a significant loss of intelligence (IQ).

The study, “Serious Fighting-Related Injuries Produce a Significant Reduction in Intelligence,” was conducted by doctoral student Joseph A. Schwartz under the guidance of Professor Kevin Beaver and was published in the Journal of Adolescent Health.

The study found that adolescent boys who are hurt in just two physical fights suffer a loss of IQ that is roughly equivalent to missing an entire year of school. Girls experience a similar loss of IQ after only a single fighting-related injury.

The study used data from the National Longitudinal Study of Adolescent Health, known as Add Health. Add Health began in 1994 with a sample of 20,000 middle and high school students who were then followed through 2002 with a series of data collections. These subjects supplied information about personality traits, social relationships and the frequency of specific behaviors.

How flipping saved a teacher’s career

Four years into his fifth grade teaching career in a small rural district in Texas, Todd Nesloney felt burned out and ready to quit.

“I was tired of worksheets, tired of teaching to the test. I wanted to do something different,” he said. “At the end of my fifth year, I was anticipating leaving.”

“I was dead set on proving my kids could be just as successful by not focusing on the tests or being taught a standardized question in class. We had the highest scores in the district. Most of my students passed on the first try. It really helped solidify in my district’s mind that I could continue this.”

“I could see a passion building in my students. I could see them love learning. Before, I was just preparing them to pass the test.”

Flipping his classroom allowed Nesloney to make the time, and he now regularly scours Pinterest for inventive projects that not only relate to what he’s teaching but allow students to create a tangible end product or engage with the material in a real-life application.